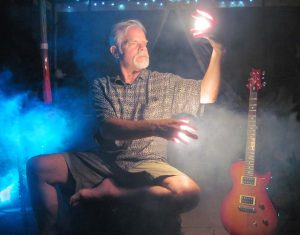 David Blonski is a multi-talented artist, craftsman and musician with seemingly boundless creativity. On this site you will find David’s complete catalog of relaxing music CDs, didgeridoo music CDs and visual music videos & DVDs. You will also find links to his performances available, his jewelry design catalog, a didgeridoo tutorial and catalog of instruments that he makes, his Labyrinth building pages and numerous other activities that he undertakes.

DAVID IS CELEBRATING HIS 38+ YEARS IN THE MUSIC BUSINESS WITH SOME VERY SPECIAL “DIRECT FROM ARTIST” OFFERS.

David plays the silver flute, keyboards, guitar, Didgeridoo, Native American Indian flute and a wide variety of exotic world, folk and percussion instruments to create beautiful relaxation music that’s appropriate for massage, yoga, tai chi, stress reduction, or meditation. His work is often used in therapeutic and educational institutions throughout the United States. David’s new interest in primitive instruments has led him to become an outstanding player of the Native American Love Flute and the Aboriginal Didgeridoo. David currently performs as a solo artist and with his three newest bands “The Crystal Alchemy Project”, “Petroglyph” and  “Beyond A Dream”.  David’s concerts and performances often include a multi-media show that features his amazing fractal art and beautiful photography.

David really is a Renaissance man in the truest sense of the word. Artist, craftsman, jewelry designer, musician, composer, producer, educator, health and massage therapist, Tai Chi instructor, Labyrinth builder, these are just a few of the facets of David’s multi-dimensional personality. David’s belief that children are our greatest treasure is now leading him into the schools to help them realize their creative potentials. David’s School Assembly programs and classroom workshops have been a great inspiration to many and David delights in their eager faces and open hearts. Welcome to the world of David Blonski where miracles and wonderment are a daily occurrence.

20% to 50% OFF DIRECT FROM ARTIST PRICING NOW AVAILABLE