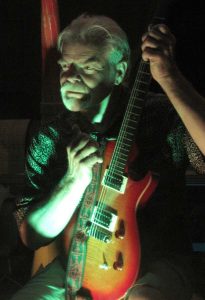 David Blonski is a man who has learned to follow his “bliss” and does so with passion and heartfelt gratitude for his gift of music and 35 years of success as a composer, performer and recording artist.

As with many musicians David heard the calling at an early age and sang in his school and church choirs.  In Junior High David participated in band where he played clarinet, bass clarinet and oboe.  When David  entered high school and college he turned his attention towards the sciences where he earned a Bachelor of Science Degree in Marine Biology.    Outside  of class, he learned to play acoustic guitar but it wasn’t until his later college years that he would pick up the flute, by happy accident, and begin his current love affair with music. David’s early work featured relaxing music inspired by nature themes and he recorded a number of albums appropriate for use with massage, yoga, tai chi and meditation.  As his career advanced he became interested in the music of our planets indigenous cultures and began producing more exotic world fusion projects featuring the didgeridoo and percussion instruments from around the world.  David is currently working with Pete Fairley in a world fusion duo known as Petroglyph performing in schools, libraries and community centers across Northern Nevada and California.  David is also working on more contemporary dance and pop music productions joining forces with Andy Lagomarsino in a indie-pop-rock band called Beyond A Dream.

David recorded his first album “Timeless Flight” in 1983 with Ed Van Fleet of Synchestra.  With that recording David knew that he had truly found himself.  Today David plays his own brand of cross-cultural, environmental music in a very free-form and spontaneous way.  He has become a superior musician, a prolific composer, a meticulous producer and recording engineer.  And if that’s not enough….. he’s a marvelous artist and craftsman who hand makes several types of folk and world instruments including the Windsong Flute and Piccolo as well as replicas of Native American Indian Flutes and the Australian Aboriginal Didgeridoo.  These instruments can be purchased from David by contacting him directly.  David is also a trained massage therapist and Tai Chi Chih instructor and he has built several meditative walking paths at churches, hospitals and community parks known as laybyrinths all across the US.

David often collaborates with other musicians in his creative endeavors.  The most notable artists being Ed Van Fleet, Jon Allasia, Anne Roos, Ken Craig, Peter Spoecker, Jim Eaglesmith, Pete Fairley and now Andy Lagomarsino the bass player from “Ron Wilson and the Surfari’s”.  In addition to the 24 + albums that David has recorded of his own work, David helped produce and score an art video entitled “FLIGHTS” featuring the computer graphic art of Peter Spoecker and a follow up project called “Fractal Meditations” which has led him to become an outstanding visual artist as well. Over the last 15 years David has been part of three world fusion ensembles based in nearby Reno, Nevada.   First with a 5 piece band called Pangae Percussion and Winds which is no longer performing and most recently with a 3 piece group called Mandra.  David also shares his love of music by performing and giving presentations on the Didgeridoo and other world instruments at schools, libraries and community centers in the Northern California & Nevada area both as a solo artist and with band mate Pete Fairley in the world fusion duo, Petroglyph .

David currently lives in Garden Valley, California with his wife, Nina.  The area is appropriately named and is the perfect setting for his special style of music.  David runs his own production company and music label called Timeless Productions and his private studio is just a few steps out the back door so he is nearly always ready when inspiration strikes.

Want to learn even more? Check out an in-depth interview with David at http://www.rdrop.com/~mulara/issues/ao91.html

For further information on David Blonski,  his recordings, instruments and art, email: